Shokkhom In pursuit of eradicating poverty

HomeShokkhom In pursuit of eradicating poverty 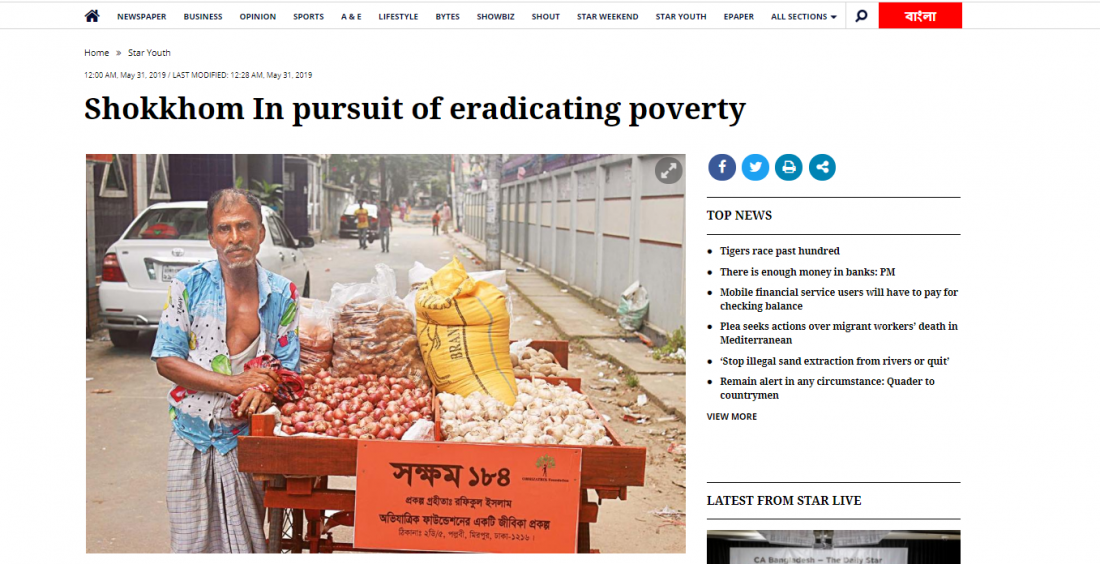 Shokkhom, a wing of OBHIZATRIK Foundation, was introduced in 2016 on a small scale with two hand-pulled rickshaw vans for selling vegetables. “The major target of introducing Shokkhom is to utilise zakat funds strategically as donations for social development,” says Ahmed Imtiaz Jami, the founder and president of OBHIZATRIK Foundation. The project, aimed at alleviating poverty, was observed for six months before advancing to a larger scale. It collects donations and provides underprivileged families with entrepreneurial resources and skill-based training. By 2018, team Shokkhom ensured that close to 286 families were operating their micro businesses with a view of becoming self-sufficient. Currently, Shokkhom operates in Dhaka, Kushtia, Barisal, Patuakhali, Khagrachari, Rangpur and Burimari. “It is a matter of pride for us to be able to connect the underprivileged families to the donors,” says Jami. “Many donors have mentioned that helping the families leaves a positive impact on their own lives as well.”

Team Shokkhom provided a rickshaw for a puller, who previously would have to rent it to earn a living.  “After some time, he started to save around BDT 3000 to 4000 monthly, and a year later, he bought a small area of land in his home district. He brought sweets for us to celebrate the achievement afterwards,” claims Zami. “All of his properties were destroyed due to a landslide and flood in his town. He was able to utilise the savings to regain an asset.”

Another man who did not have a tube well for safe drinking water in his village was able to save up enough money for a tube well with the micro-business that Shokkhom helped him to set up. “Today, thousands of people are using the well to have clean and safe drinking water, which is an inspiration for us,” says Zami.

Shokkhom selects their candidates through a thorough process. The first step is to identify the candidates by checking their financial history, marketable skills, reputation and desire to improve. The candidates’ existing loan histories and their willingness to work hard with honesty and dedication play an integral role in the process as well.  The second step involves assigning donors and selecting business projects. Shokkhom has 23 types of startup business models presently, which are developed based on current market conditions, financial investments and existing skills of individuals. Interested donors are reached out by a network of 140 volunteers working in nine different districts. The third step is to train and disburse funds. After a donor is found and a model is developed, an individual goes through seven to ten days of orientation on business development, technology and financial management. In the final step of the selection process, volunteers monitor the micro-businesses and check if they are running smoothly or not. They provide the beneficiaries with any form of support that they require and visit them once every week. At times, meetings are held to discuss strategies and solutions to different problems. The financial reports are sent to the donors via e-mails. The donors also receive the progress reports twice a year.